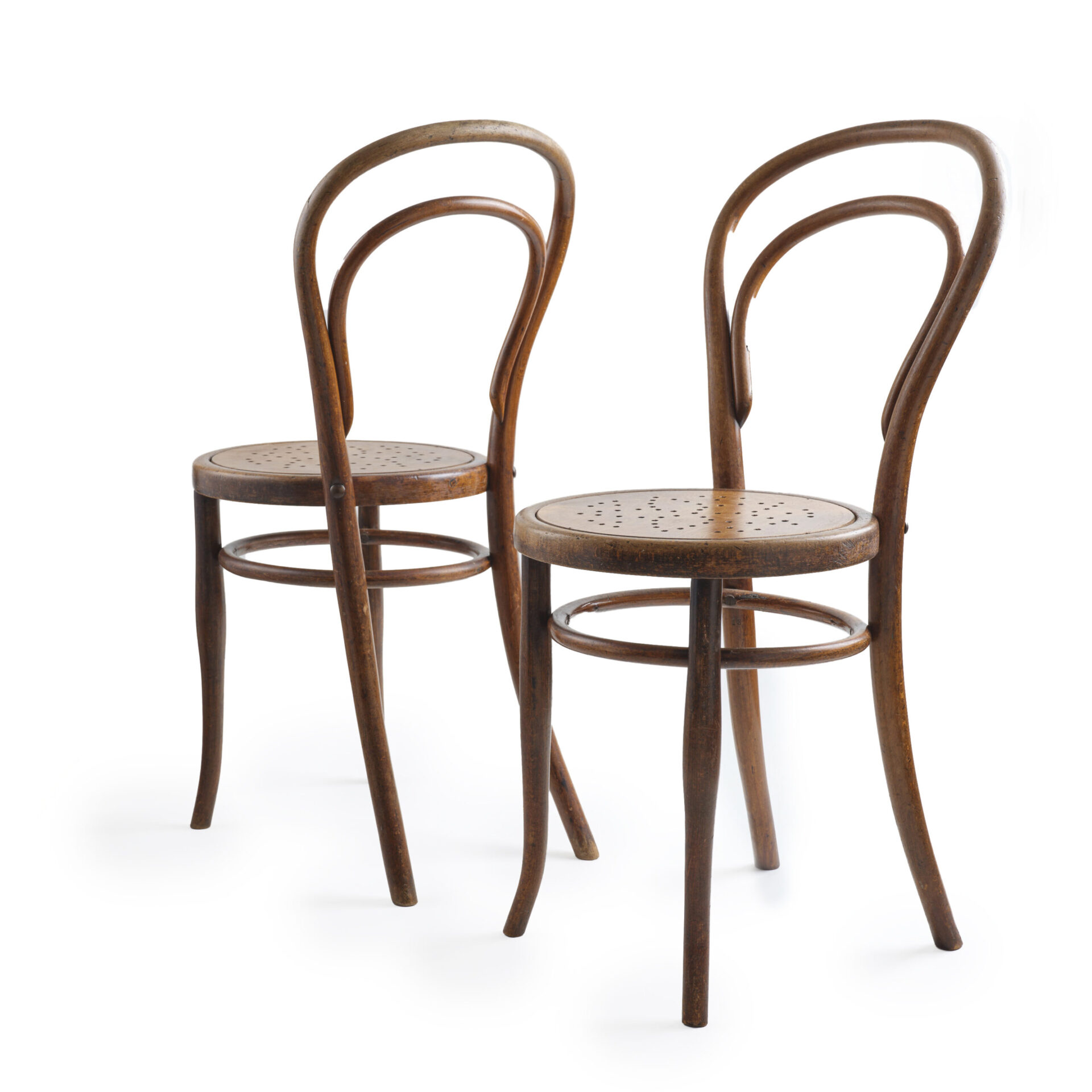 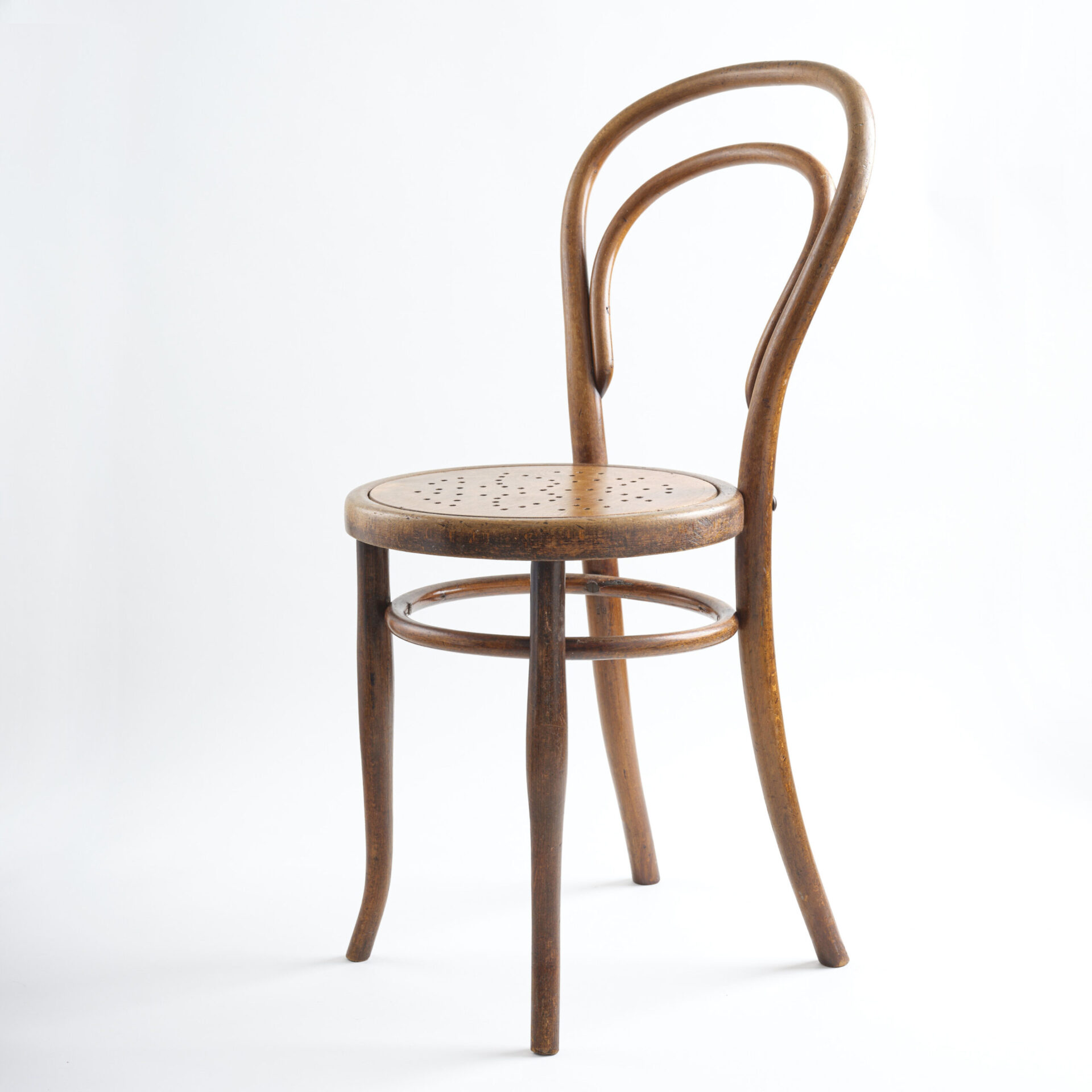 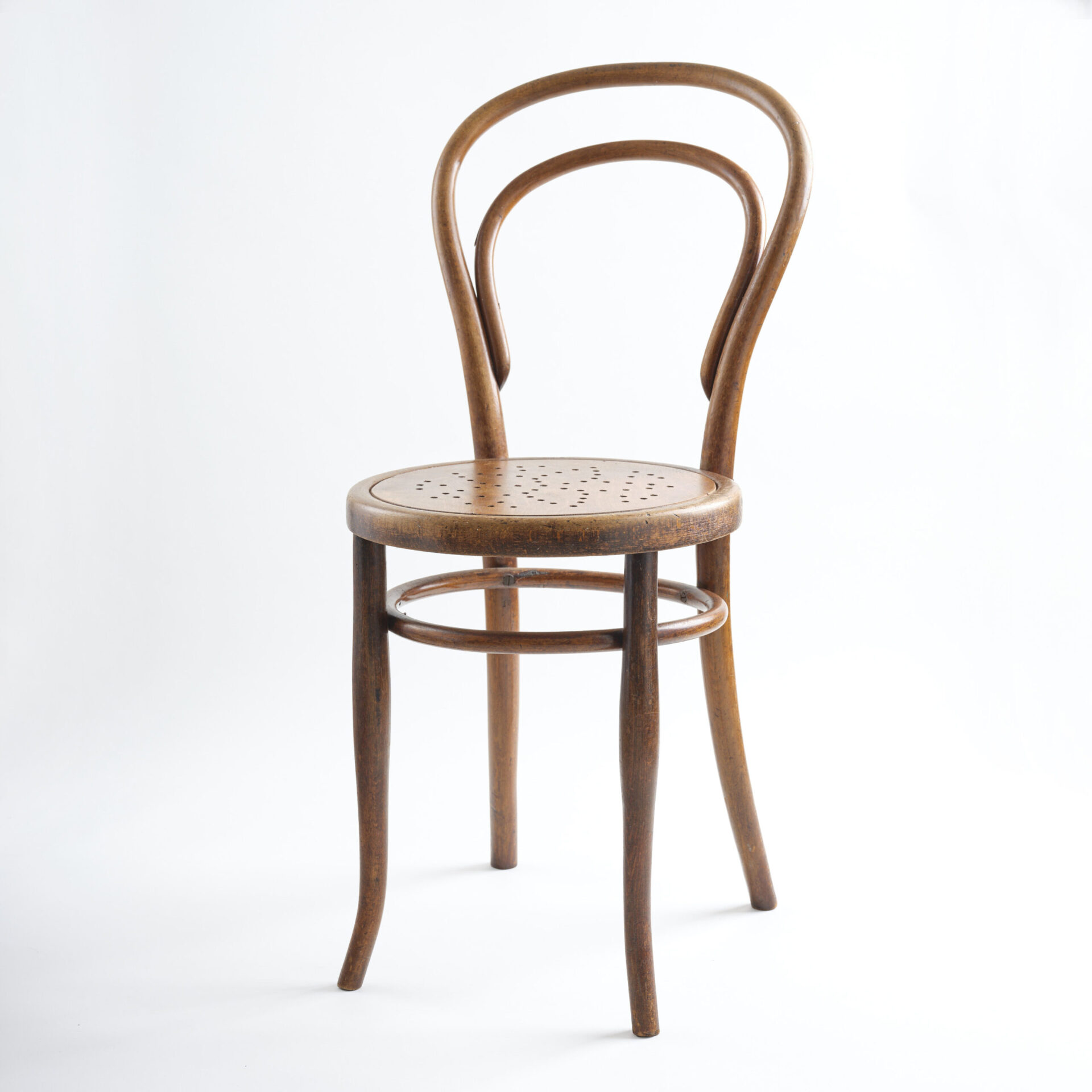 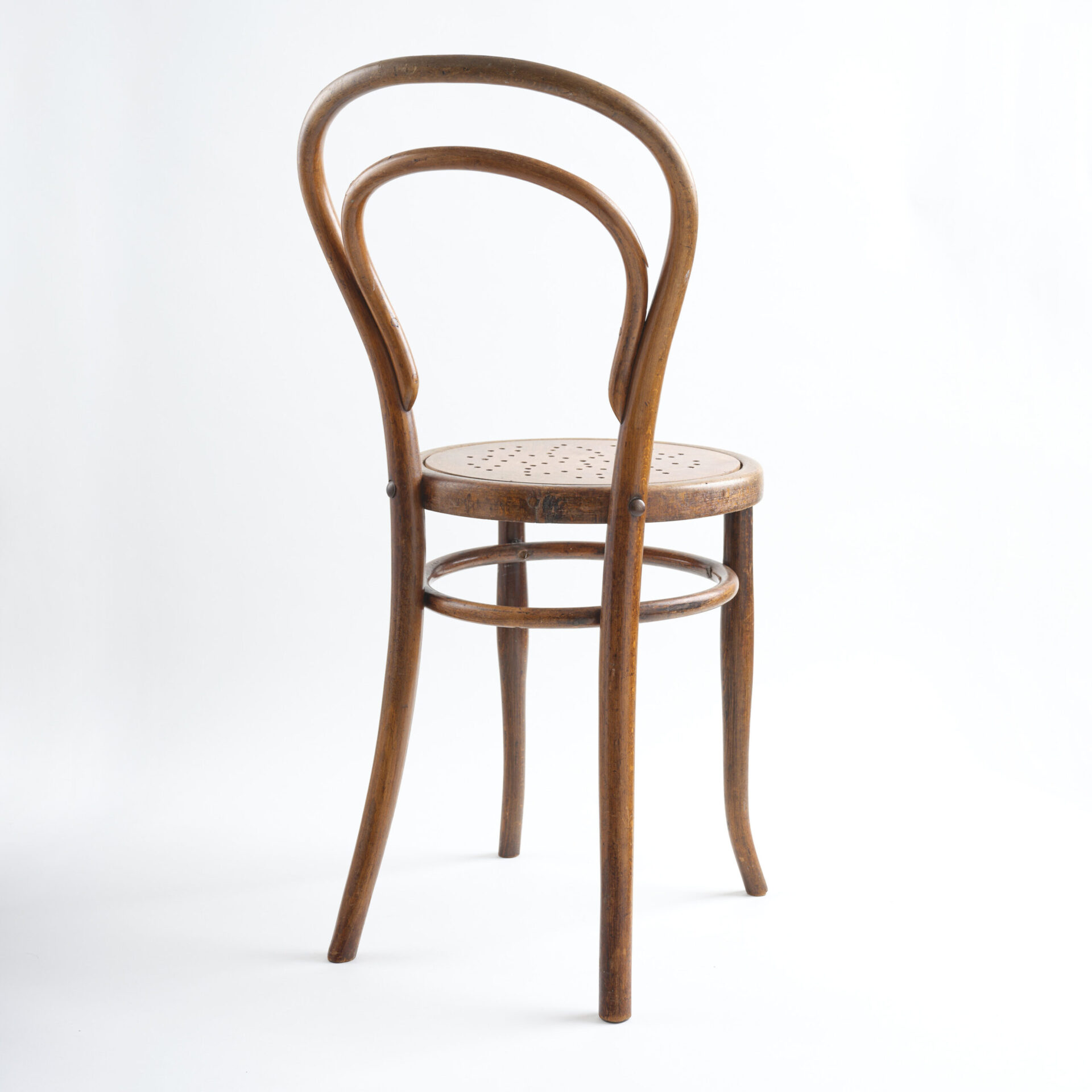 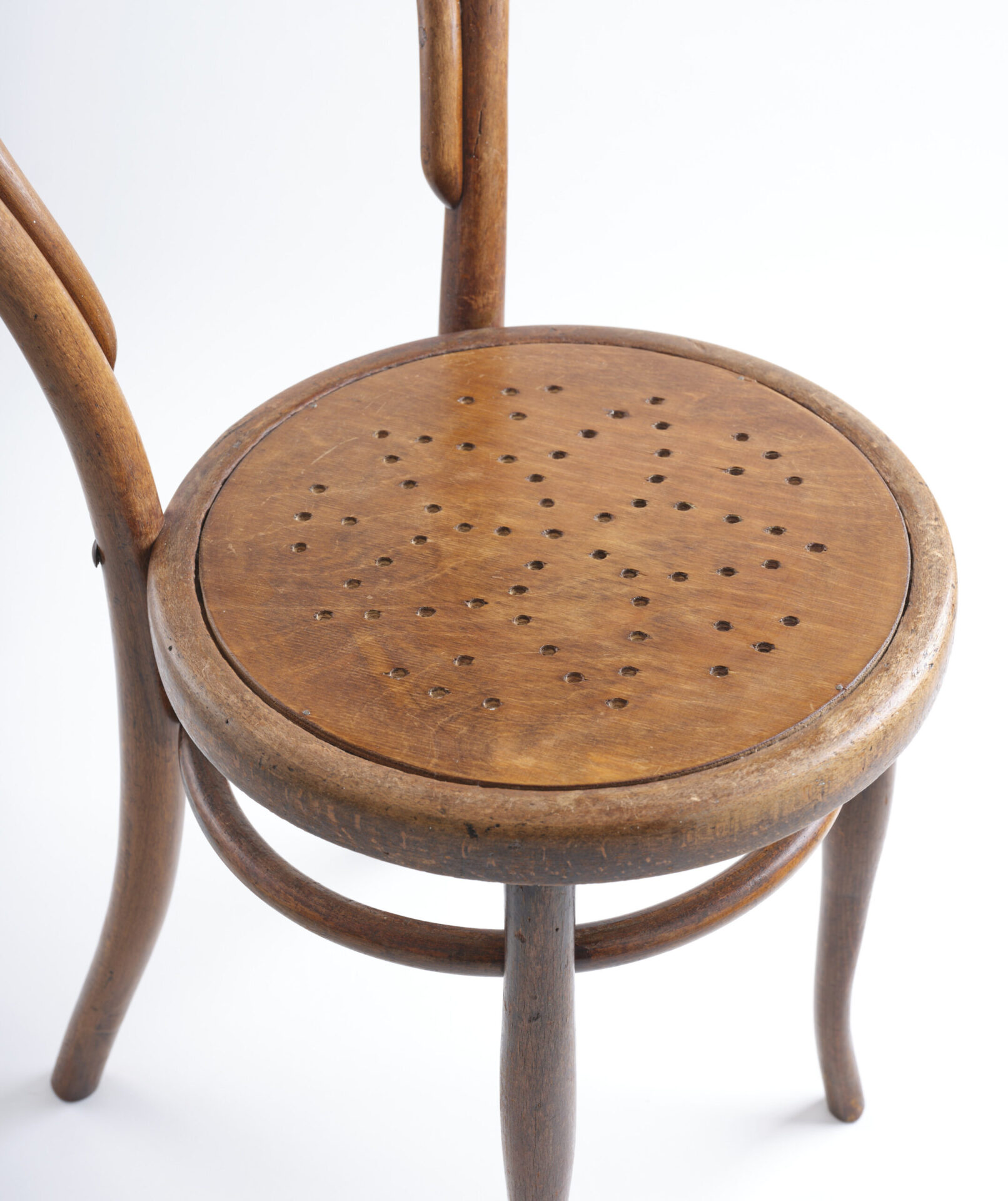 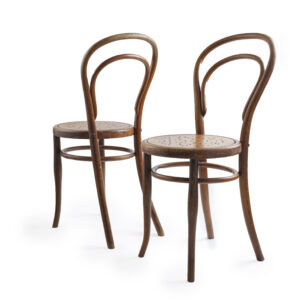 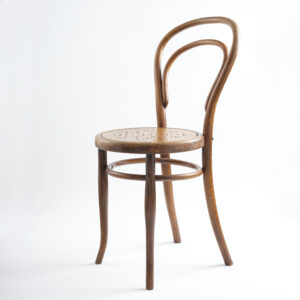 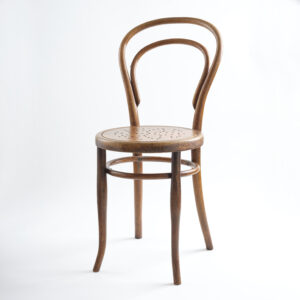 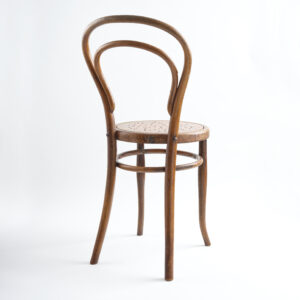 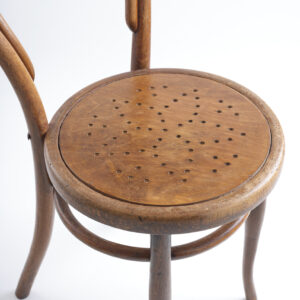 Thonet produced a range of products, however his most successful and familiar piece of furniture remains the unassumingly titled Chair No. 14, created in 1859.

Sometimes known as the bistro chair, its clean, unadorned lines and pioneering production techniques remain distinctly modernist. Circa 1910 these chairs with double hooped back over a circular seat, stand on four slightly out swept legs, held in position by a circular bentwood bezel.

Perfect as a kitchen chair, but equally charming and versatile when used as a bedside table!

Contact us to enquire about this item and for a delivery quote.

Sold individually. Price is for one chair.

By their very nature vintage pieces have a history and may show signs of use. These chairs have been updated in recent years and the cane seat has been replaced (please see pictures). If you would like further information regarding the condition of this item please contact us.

For chair manufacturers, the true difficulty lies in making multiple chairs, each of the same standard and specification, over and over again.

One of the first designers to overcome this problem was Michael Thonet. Born towards the end of the 18th century, Thonet began his career as a German cabinetmaker, though he soon branched out, embracing the burgeoning industrial processes of the 19th century.

The Thonet family firm for a time held the sole rights to produce pieces using a steaming technique to bend wood into the organic curves that characterize the designer’s work.

This not only meant Thonet could make beautifully curvy furniture, but he could also make the constituent, uniform parts of his chairs relatively cheaply, and he became known for his methods, which allowed him to produce high-quality and highly decorative pieces using low-cost technology.

It enabled furniture to be mass-produced, shipped as parts and assembled at destination at very low cost, setting a precedent in the production of furniture.

Thonet produced a range of products, however his most successful and familiar piece of furniture remains the unassumingly titled Chair No. 14, created in 1859.

Sometimes known as the bistro chair, its clean, unadorned lines and pioneering production techniques remain distinctly modernist. However, unlike other products of modernism, Chair No. 14 has also proved fantastically popular, and remains that rarest of items: an artfully designed classic that is still popular over 150 years on from its creation.

The success of No. 14, one of the most commercially successful chairs ever produced, has done nothing to diminish its enduring charm, which still today retains a fresh, elegant utility.